Designed to be a multi-generational home for 3 generations, the design premise of these 2 unrelated family homes (who just happen to be very friendly neighbours) focuses on future possibilities of expansion built upon an older original base.

These two projects are reconstructions, not new builds. In the design, we see the existing structures as design generators, not encumbrance. We hope to strike a dialogue between architectural posterity and our own very real Asian practice of multi-generational living. This playing off between 2 generations (of man and of house) should manifest in formal design expression as well as narrative through program.

If existing housing structures had contained an earlier generation of people, their lives, their families, their successful futures, then the reconstruction and introduction of new areas is another generation of building, of people, of lives. The parallel of generational architecture and life, and that new life is borne from the old, so too that the old building footprint remains a stoic and strong structure around which new spaces are now ordered.

The original structures remain integral to the design of the new architecture. Two systems (new and old), oscillating between two realms (architecture and people), GAD explores two different ways (at 1 and 1A) amidst potentially myriad of possibilities.

Often, the staircase is the transitory space of a house that, at GAD, we find very interesting. It is the place of movement; of transitions; of joining and separating spaces. The Client's brief was to create future separation of spaces with entirely separate access to different sections of the house. This is to plan ahead for the 3rd generation young adults of the family, who may want to start their own families or have their own living spaces. In so doing, horizontal and vertical circulation have to be considered.

The design strategy we took, was first to explore the most space efficient way for a single house to have 2 staircases. Here, we adopted the overlapping scissor stairway as a design generator that was similar in structure to the DNA helix. Having two staircases, overlap and intertwine within each other, meant that in plan, the area taken up was only that of 1 stair, yet housing 2 stairs that carried the inhabitants to different sections of the house.

The design of the house was then quartered into four, the center and heart of the house was the staircase. The axis of the stairs, form air channels that run through the house on 2 axes, bringing in natural light and ventilation. The first stair brought people up from the main entrance and dining area, to the master bedroom, study and lift. This stair also continues to the attic floor where the family lounge and another bedroom suite was. The second stair brought people up from the side, at the media room, to two bedroom suites on the second storey. One of the bedroom suites has an additional internal loft as well. If so wished, these two staircases can be entirely separated by partitioning in the future. This then creates, a living room with kitchenette (current media room), and two bedroom suites as a stand-alone unit.

A large part of the ordering and organisation of spaces are premised on the double helix formation of inter-weaving spirals. In the architecture, the double axes gaps help express the rooms and spaces as discrete forms. Each space or room has its own external expression, visible from the facade.

Leading from the 2nd staircase and the connecting spaces, the 2 bedroom suites that are connected to that circulation and separable space are also clearly expressed with con-wood cladding on the facade. As such, the house in totality, looks like an amalgamation of 4 "pitched roof" forms that come together to celebrate the formal central space: the stairwell. The stairwell no longer is a transitory space but a space of delight, of inter-connectivity between spaces and people. 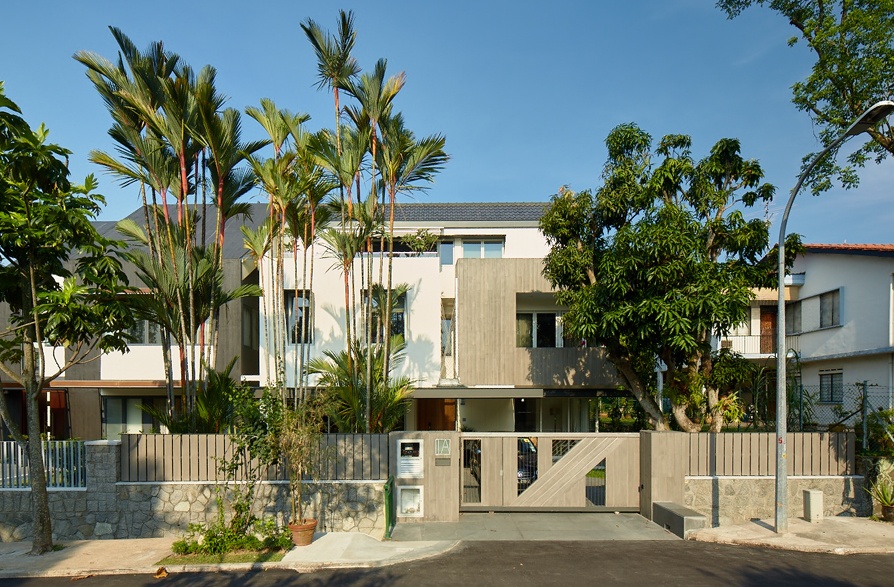 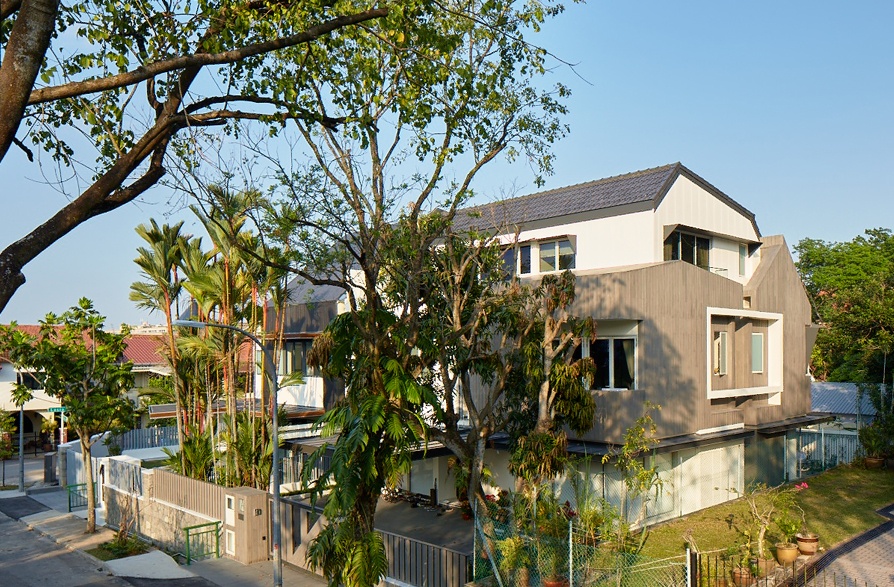 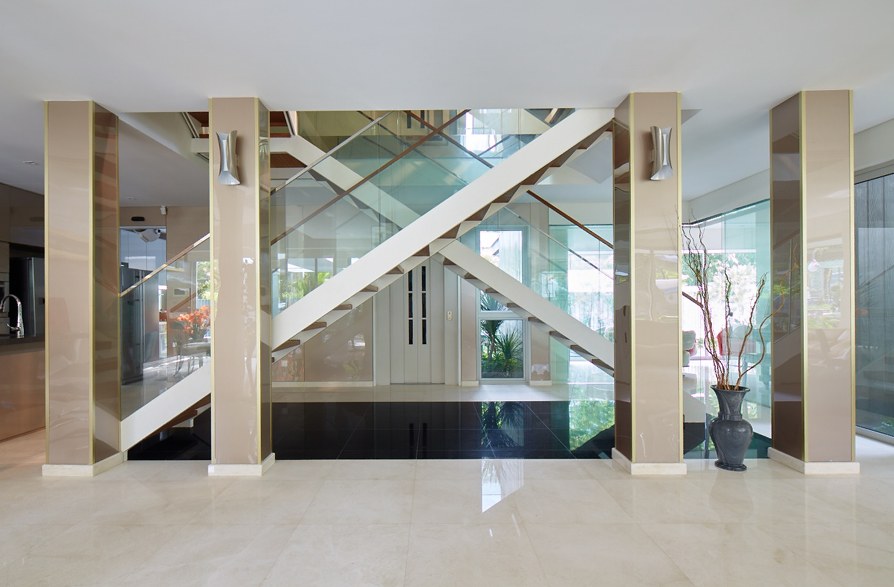 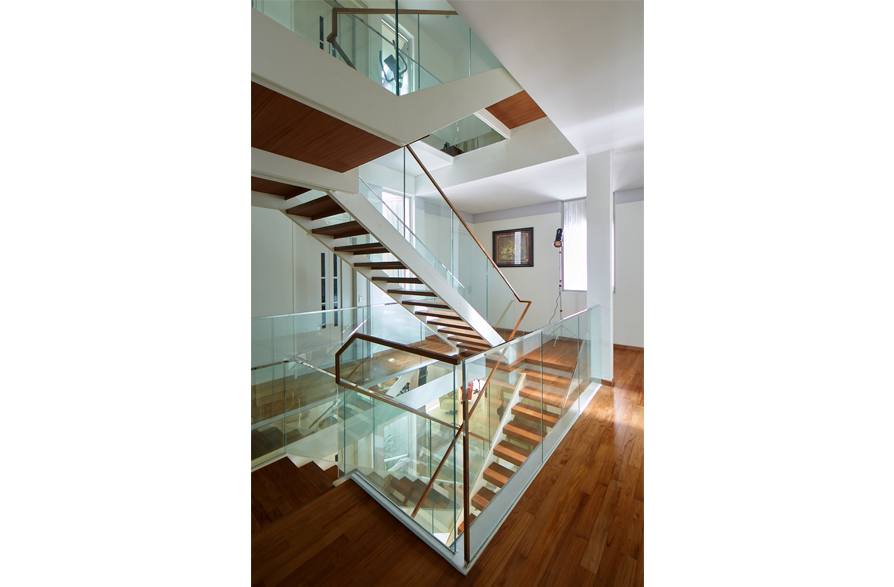 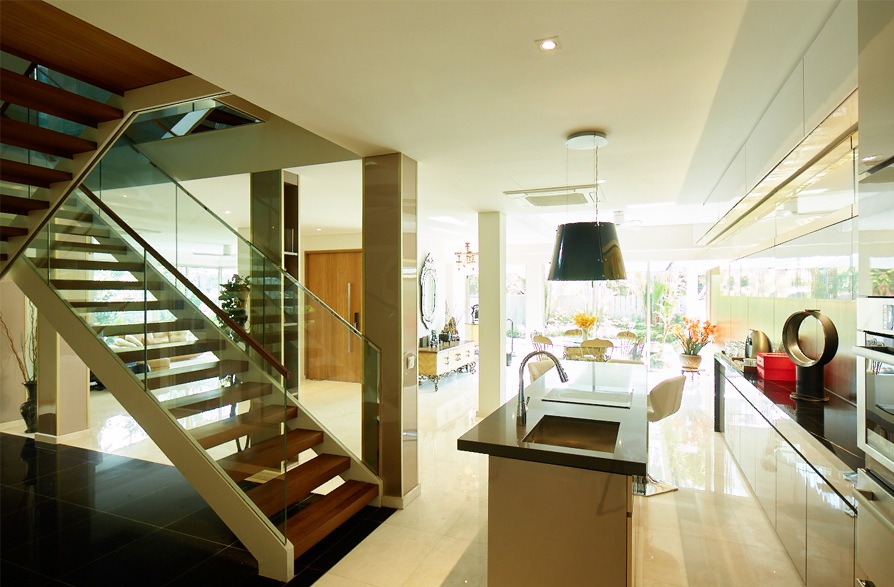 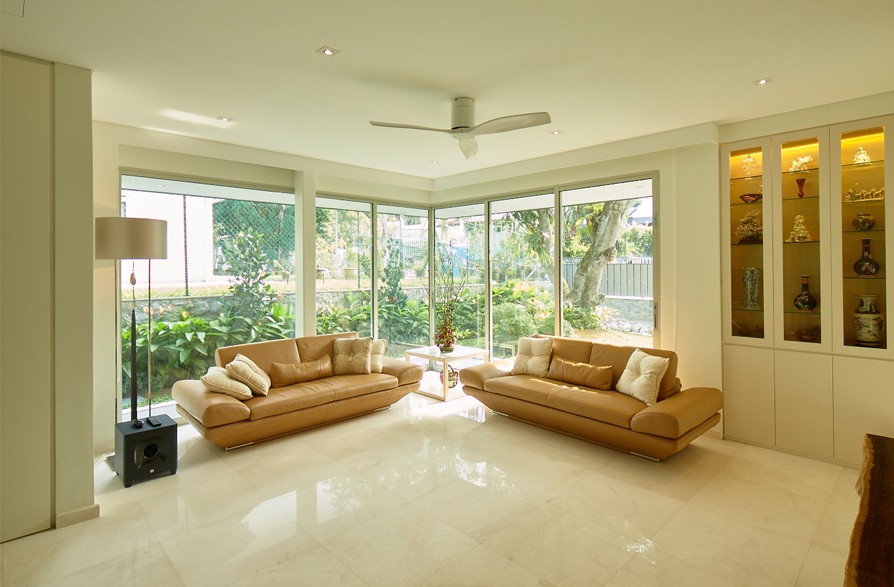 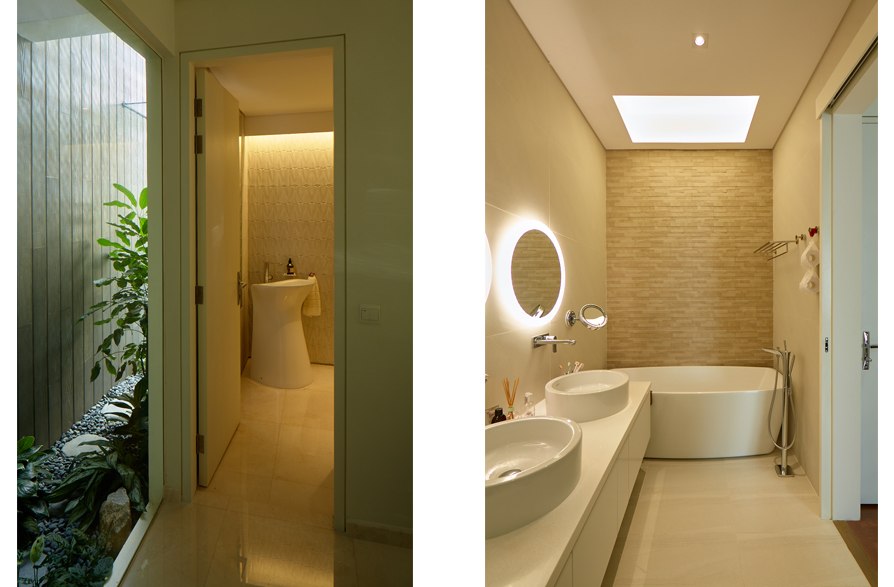 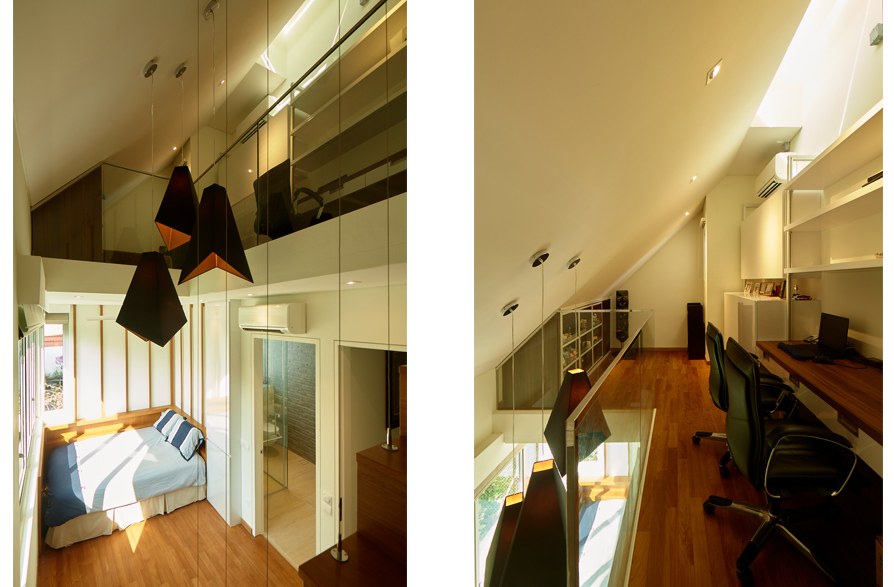 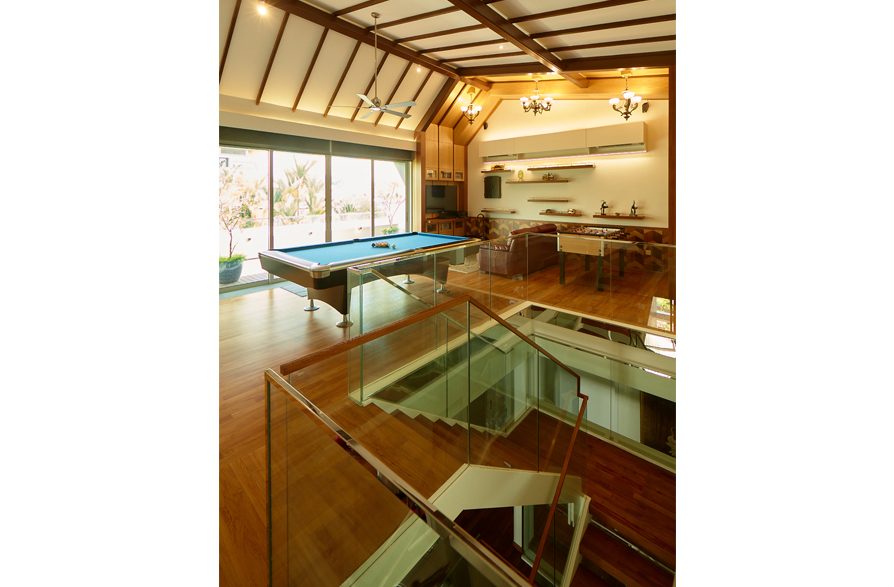 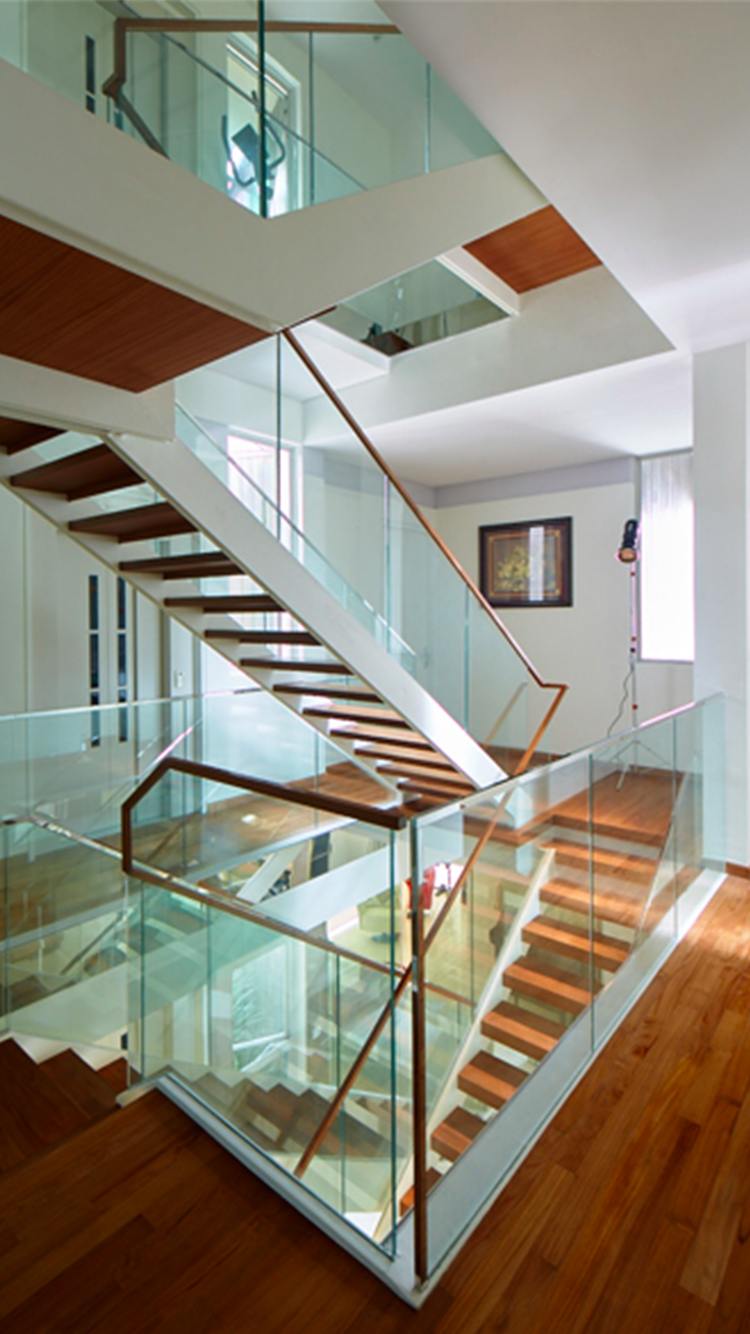